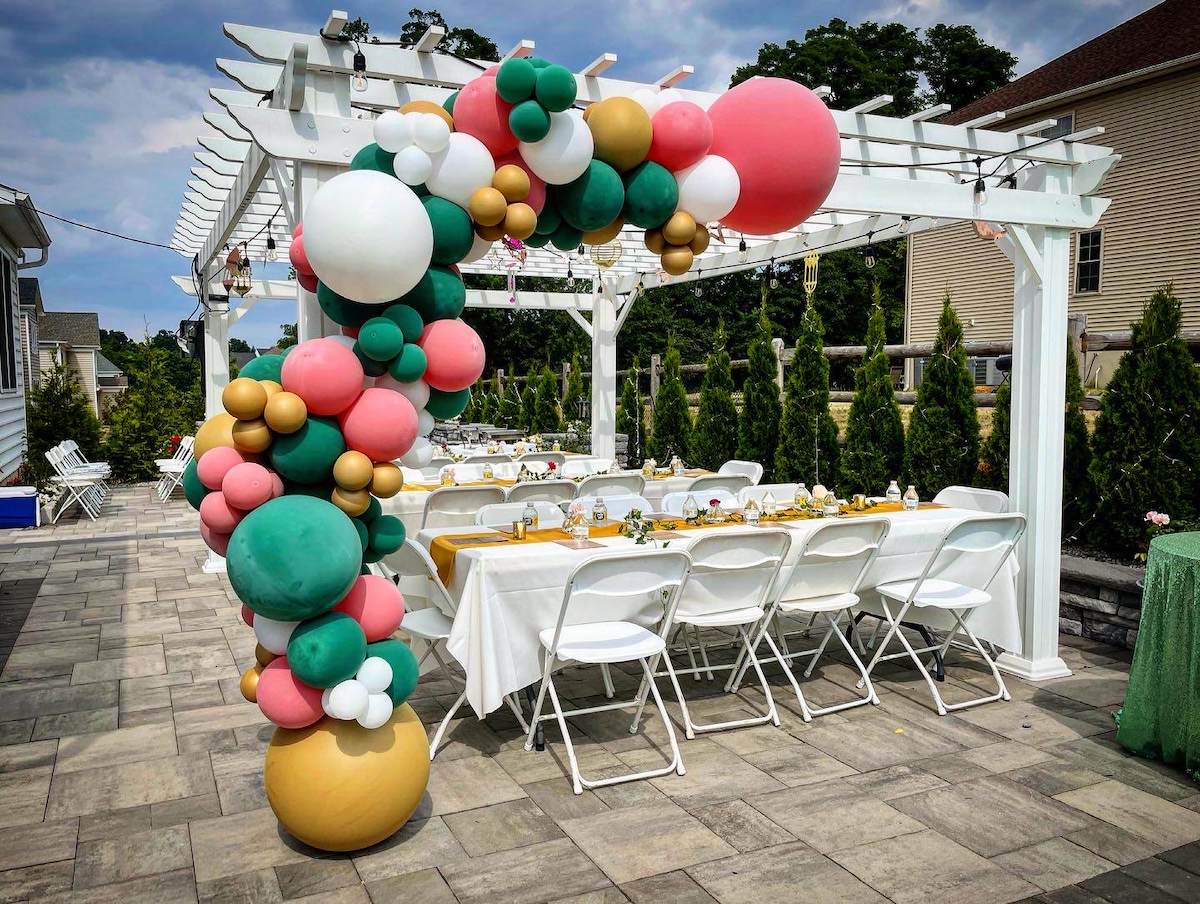 Setting up an outdoor balloon garland in July is not for the faint of heart! The balloons are more likely to pop, and the latex is susceptible to oxidization (when the balloons take on a cloudy, matte look to them.)

We ran into all of these issues and more when setting up multiple garlands for a combined new baby/religious celebration in New Brunswick. The hot July day was no match for our creativity, and the final installation was even more than the client had hoped for.

Our client reached out and asked if we could create three separate installations for their upcoming party, which was to be a celebration of the birth of a sweet baby girl, and a religious rite of passage for a young boy.

The first outdoor balloon garland was to be mounted at the gate, where family and friends would arrive and enter into the backyard. The second garland was larger, and meant to frame the edge of a pergola where guests would be seated. Finally, the client asked for an organic balloon arch, set up behind two tables where the guests of honor and their families would be seated.

With the design worked out, we sent a color palette for approval. After providing a couple of different options, the client selected a combination of White, Chrome Gold, Rosewood, and Forest Green.

As the day of the event drew near, we began assembling our materials for the install and, as always, checked the weather. It was going to be a scorcher!

For outdoor setups, especially in the warmth of late spring and summer, we use a special method of inflating our balloons to strengthen the latex and prevent popping as much as possible. However, despite our best efforts, it is impossible to guarantee that balloons will behave as planned. It’s important to plan for such issues when ordering an outdoor balloon garland for your next event!

The balloons were inflated and the garland spines assembled, loaded into bags, and packed into our car for safe transport to the party (with the air conditioner cranked, of course.) 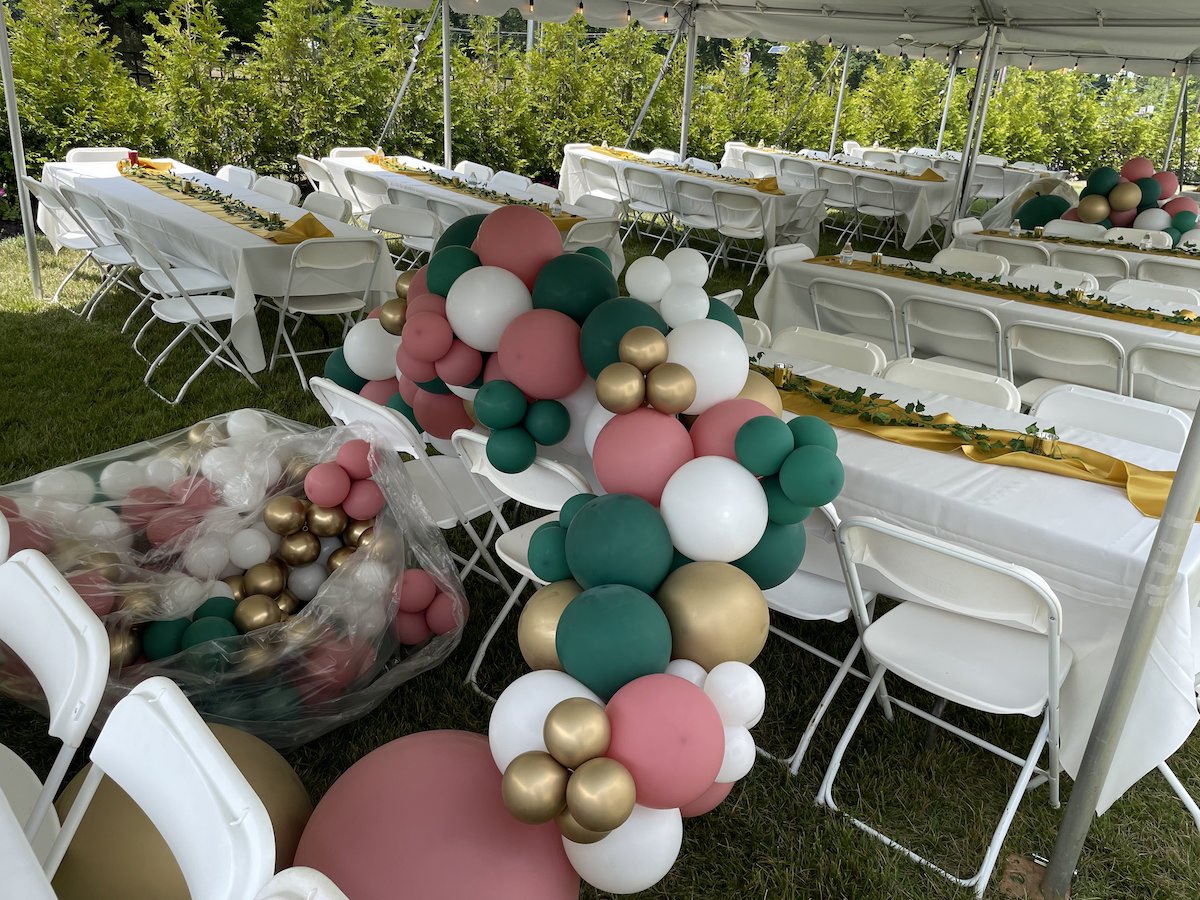 We did as much work as possible under the protection of a large tent, which kept the balloons from popping.

Upon arrival at the party, we unloaded the balloons and set up beneath a tent, placing our garlands safely between tables on the grass. Because we were in the shade, and thanks to our inflation method the balloons did not pop when placed on the grass as we finished adding larger and smaller balloons to complete the look of our garlands.

However, despite our shady refuge, the heat quickly oxidized the balloons. We had to use caution while handling the garlands to make sure our fingers didn’t leave prints on the latex!

The Great Inflator vs. Mother Nature

The first installation to go up was the balloon arch. However, the second the balloons were brought into the sunlight, the harsh rays immediately effected the latex. The slightest brush against the grass caused several balloons to pop!

We also discovered that the arch would not stand properly in the space provided. Out of fear of having the arch collapse right on top of the guests of honor, a decision was made to split it up into two separate organic garlands, which would be placed in front of the two main tables.

With our new game plan in hand, we set straight to work. Time was of the essence, so we focused on hanging the gate and pergola garlands before tackling the new installations.

By the time we were finished, we had two stunning garlands laced along the table fronts, as well as bonus balloon frames around the easels displaying the names of the guests of honor! 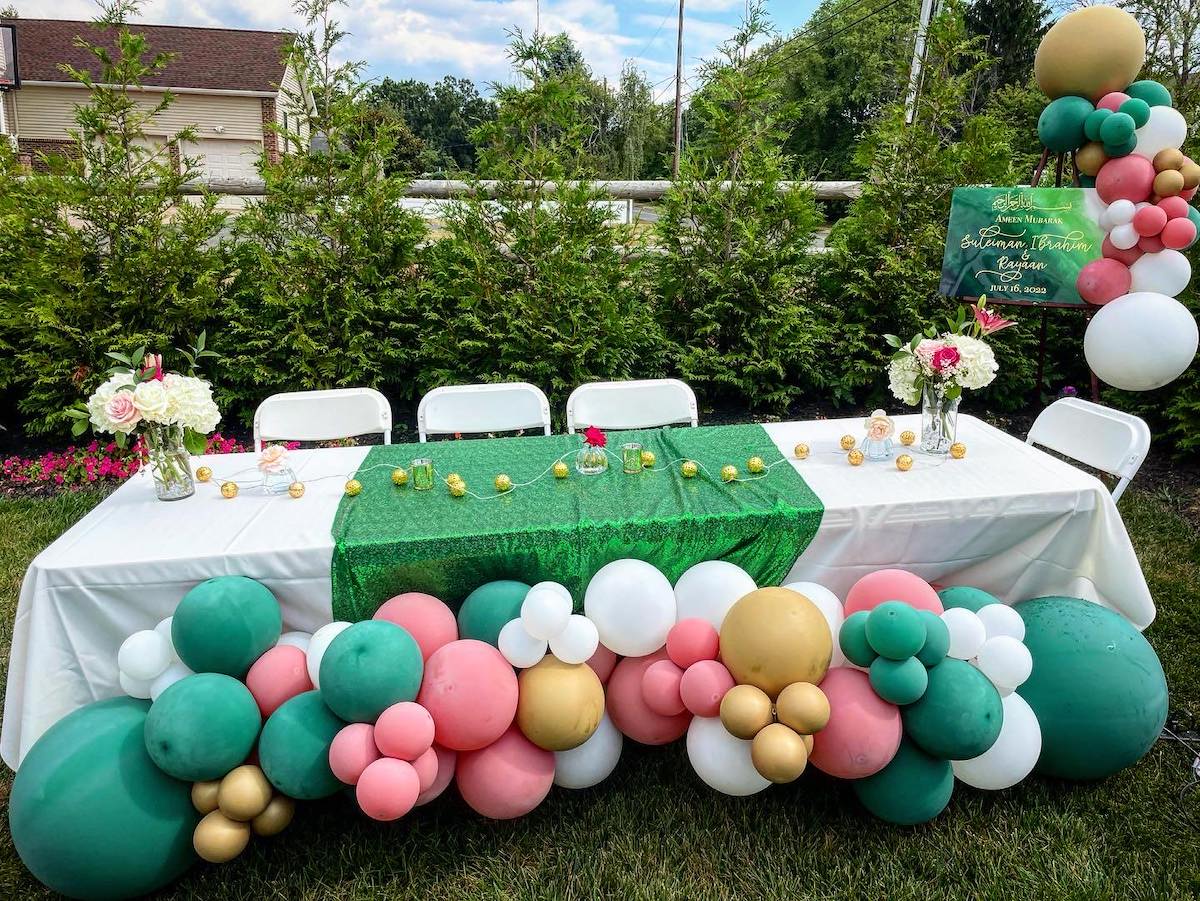 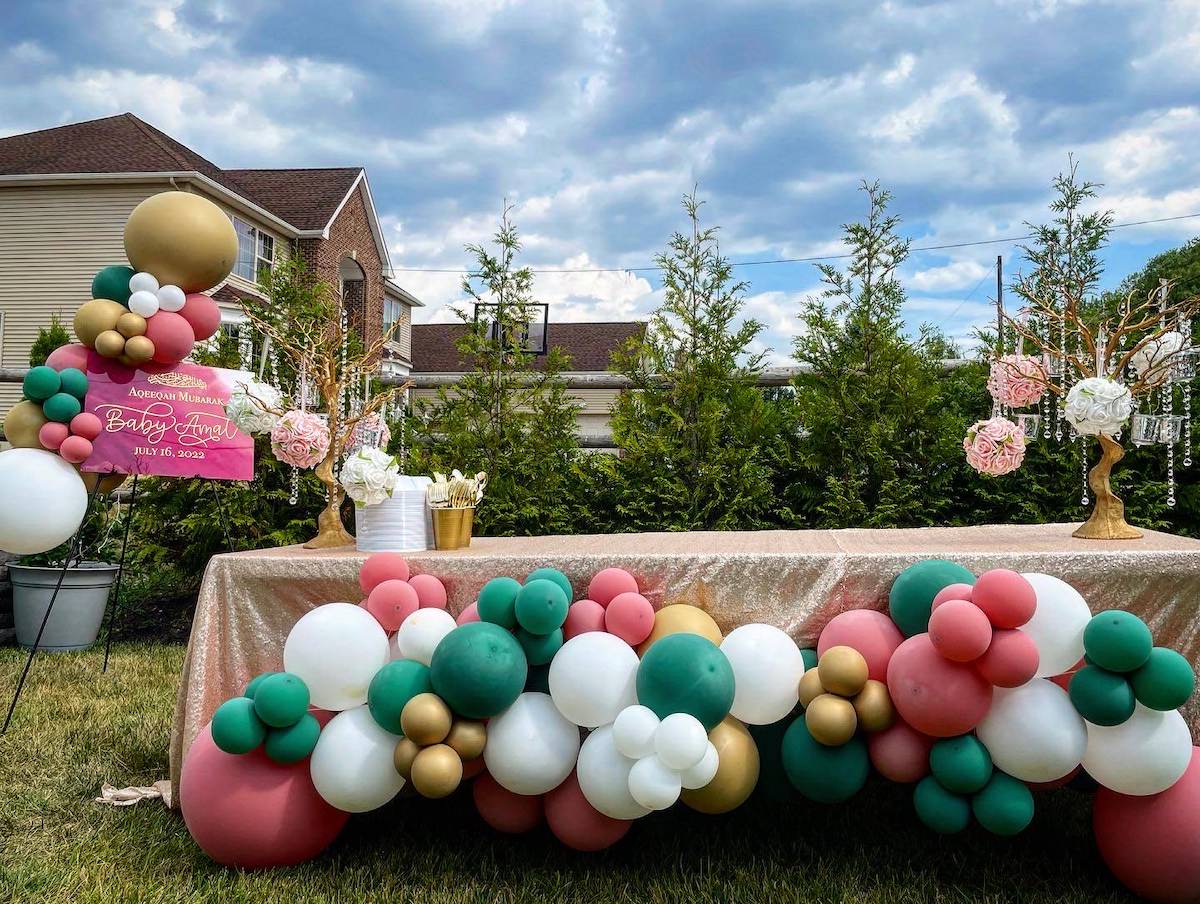 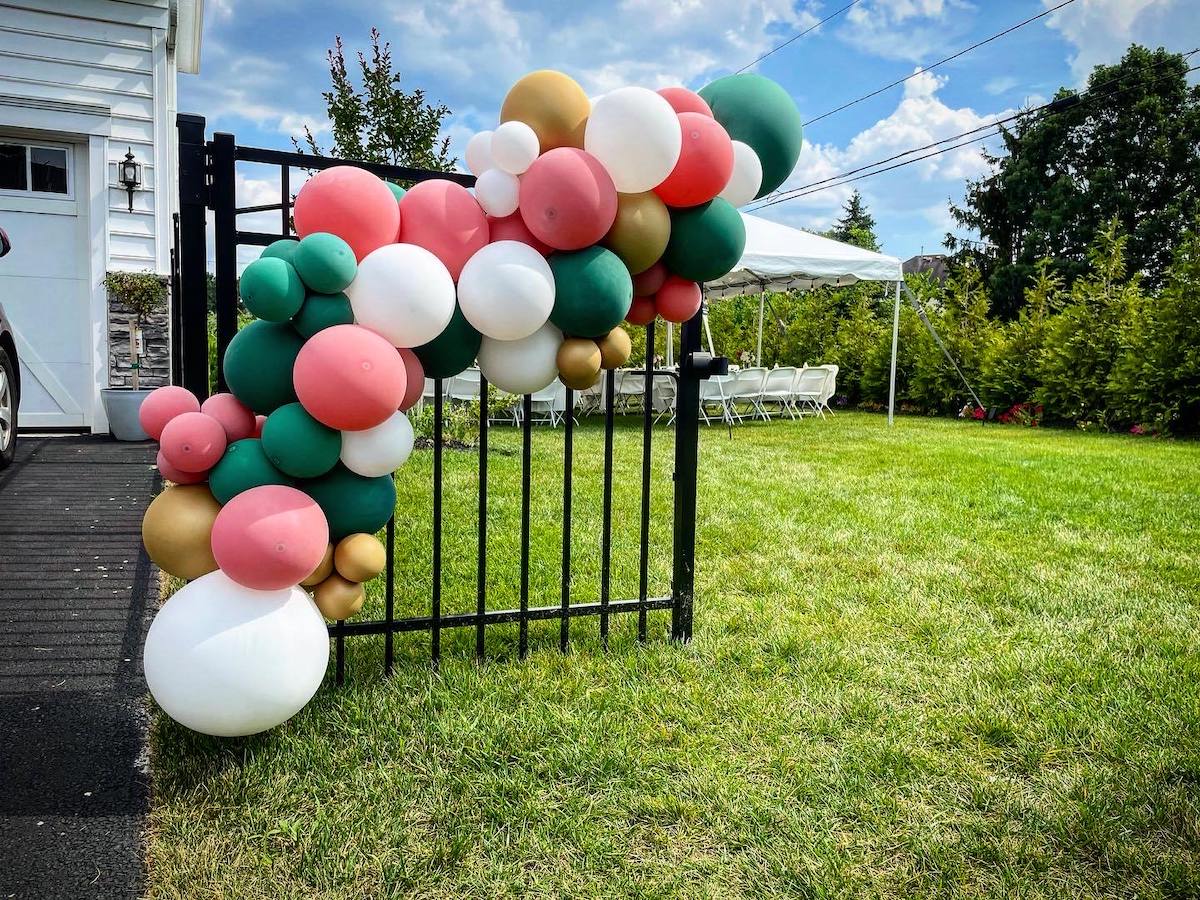 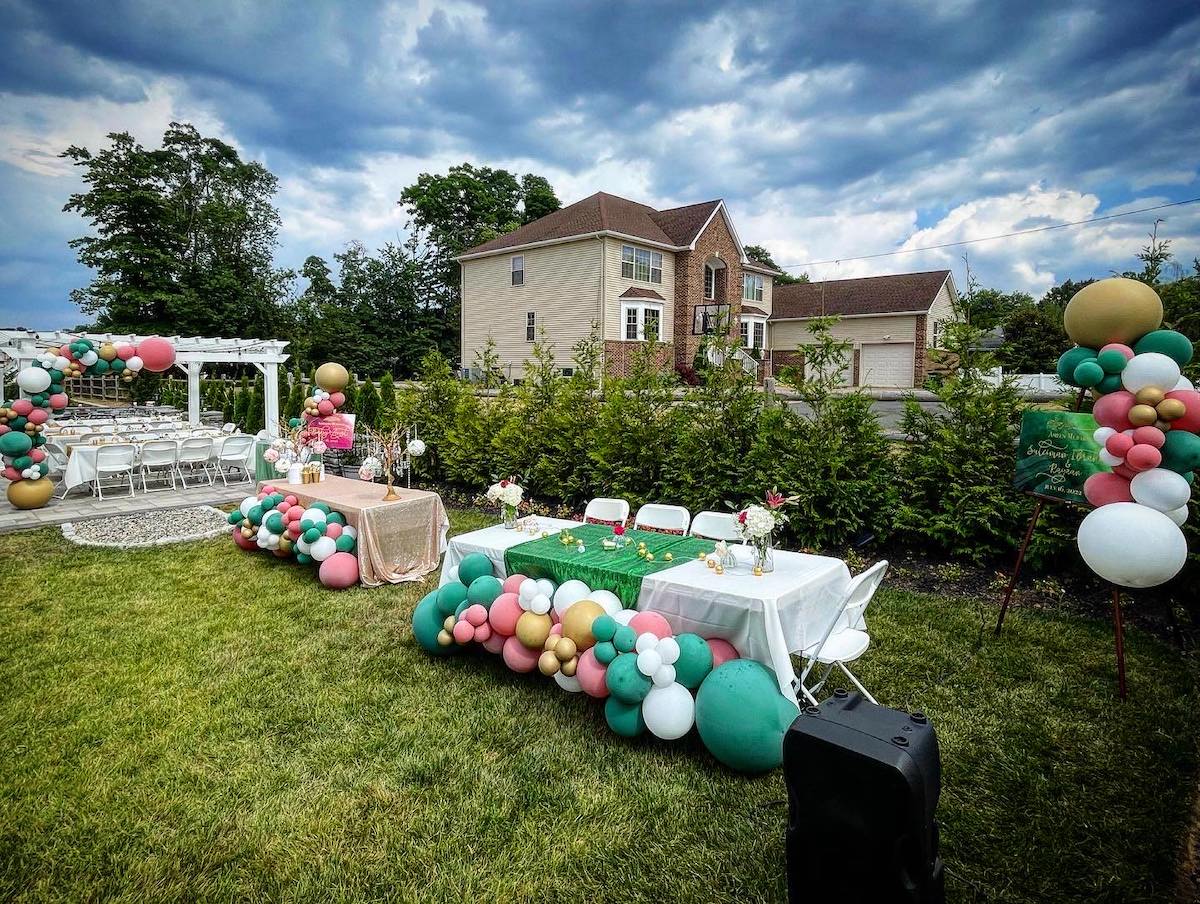 The client was so pleased with the end result, she told us it turned out even better than she had hoped, and that she loved the look more than the idea of the original arch.

At the end of the day, our top priority is making sure our clients are thrilled with our product. We were beyond thrilled to hear the client loved our creative new approach to her balloon décor!

Inside The Great Inflator

About Us
Blog
Arches
Garlands
FAQs

Recently On Our Blog

Thanks @amazon for inviting us to your #levittown